Two years ago, Insomniac released the best superhero video game ever made. Marvel’s Spider-Man perfectly captured the beloved character and the city he protects in a way that no other game based on a comic book ever had before or has since. Swinging around New York City felt exactly like it was supposed to feel, the combat did justice to Spidey’s strengths and weaknesses, and the story felt like it was ripped from the pages of a killer comic arc. As much as we might have thought we wanted a game set in the Marvel Cinematic Universe, allowing Insomniac to tell its own story free from the shackles of any other medium paid off in a major way.

Based on the critical acclaim and the popularity of the PlayStation 4 game, it seemed inevitable that there would be a sequel. Sony confirmed the existence of a sequel earlier this year, one in which Miles Morales would be the star. At the time it was unclear if Marvel’s Spider-Man: Miles Morales would be a sequel, a spin-off, an expansion, or something else altogether, but having completed the main story, I can confirm that Miles Morales is a full-fledged game of its own, although it’s not quite as sizable as 2018’s Spider-Man.

TODAY'S AMAZON DEALS: The US is running out of N95 masks – get these instead for under $2

Thankfully, it doesn’t need to be, because it builds upon everything that was so great about its predecessor and tweaks the formula just enough for Miles Morales to feel fresh. After all, Marvel’s Spider-Man is just over two years old, and between the lengthy campaign and the trio of DLC expansions, it seemed like developer Insomniac Games might have gotten all the meat off of this particular bone. Miles Morales proves that theory wrong.

The biggest strength of Miles Morales is the titular character. If you saw the animated movie Into the Spider-Verse, you know what a rich, interesting background this version of Spider-Man has, and that shines through once again in this game. Miles is charismatic, funny, goofy, and just as filled with angst as Peter Parker, but for entirely different reasons. Miles has a Black father and a Puerto Rican mother, and even though the New York you’ll be exploring in this game is the same as the one from Marvel’s Spider-Man, the perspective is completely different, both in terms of where the action is focused and how Miles relates to the world around him.

Following the events of Marvel’s Spider-Man, Miles is living in Harlem with his mother Rio, who is running for city council. In typical comic book fashion, Rio finds herself caught in the middle of two feuding forces in Harlem, and the battle is about to boil over. Meanwhile, Peter Parker takes a vacation, and it’s up to Miles to save his mother and the neighborhood he calls home.

The relationships between Miles, his mother, and his supporting cast of friends, foes, and even the random passersby on the streets of New York are bright, lively, and believable. This was a strength of the first game as well, but as with every other part of this sequel, it feels like the developer had an even firmer grasp on the tone and the dynamic between the cast.

This bleeds into the gameplay as well, especially when it comes to the way that Miles swings through the city and does battle with the baddies. You’ll be right at home if you played any of the first game, but you can see how much care was put into making Miles his own Spider-Man, even if the actual mechanics are the same. 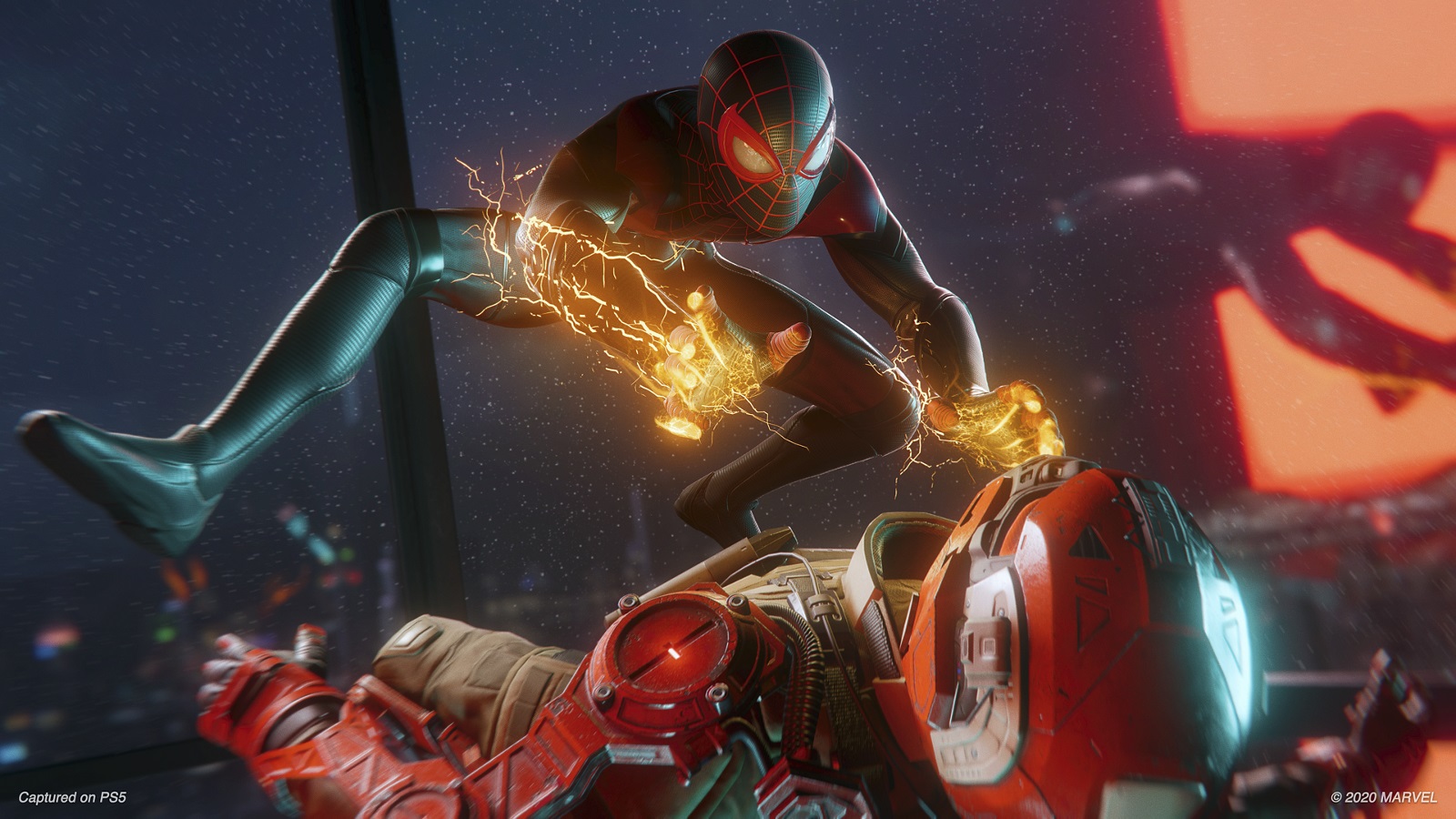 I won’t rehash my review for Marvel’s Spider-Man, but the combat remains as tactile and thrilling as ever, with a few fun twists that elevate fights even further. Miles has bioelectricity powers that he can use to dispatch powerful enemies or groups of enemies far more efficiently, which makes some of the battles in the back half of the game less of a slog than they were in the 2018 game. I found the rhythm of these fights to be far more entertaining than those of the original. You can also use these powers to solve puzzles, which are used for little more than breaking up the action, but I never got tired of seeing Miles power up a generator by smashing it as hard as he could.

The progression system is similar to Marvel’s Spider-Man as well, with dozens of suits to unlock — each with their own specific perks — gadgets to upgrade, and skills to acquire that make combat and traversal more dynamic. The game even encourages you to start a New Game+ to unlock everything on offer.

The open world, as I said above, is still New York City (a slightly truncated Manhattan, to be specific), but it’s still filled with activities to complete, collectables to find, and crimes to stop. Once again, there aren’t quite as many icons on the map this time around, but it also feels less overwhelming. Hitting 100% is within reach.

In the end, one of the reasons that Marvel’s Spider-Man: Miles Morales works as well as it does is the same reason that people were so concerned when the game was announced: It’s more compact and gets to the point more quickly than the original game. Miles is magnetic (the actor and the character), and because there’s less to do, I could see myself returning to the game until I see everything there is to see in this virtual Manhattan. I love a good 30-hour, open-world epic, but Miles Morales is the sweet spot and a perfect launch game for the PS5.

Sony provided BGR with a copy of Marvel’s Spider-Man: Miles Morales for the purposes of this review.