Vaccinations against the novel coronavirus are underway in several markets, where at least one vaccine candidate that completed Phase 3 trials has received emergency use authorization. The US has two drugs available, including the Pfizer/BioNTech and Moderna vaccines, while most markets only have access to the former. Both vaccines offer very good protection against severe COVID-19, but they require two separate doses administered a few weeks apart. Full immunity is obtained in the weeks following the second inoculation. That’s why public health officials already make a point to remind people that it’s imperative to return for the second shot.

Keeping track of vaccines is an important part of the entire COVID-19 vaccination logistics process. Patients will have to know when they got the first shot and what drug was used, so they receive the corresponding second dose a few weeks later. Americans who get vaccinated receive a vaccination card where these details are recorded. Other countries will employ similar measures. But some governments are already looking at smartphone apps for creating a digital record of COVID-19 vaccination. An iPhone app that works with Apple Wallet might be the only thing people in Los Angles County will need to prove they were vaccinated. Initially, the app would help people and health professionals keep track of vaccinations. But the app could then open doors to various places where vaccination proof will be required.

These best-selling KN95 masks used to be $45 at Amazon

Startup Healthvana partnered with Los Angeles County to offer people access to a digital record of their vaccination history. The app will ensure that people receive the second dose and send notifications before the second appointment.

The digital vaccination record could then be used for access to events or activities that might require vaccination. The list of such activities includes concerts or airline flights. The app will also be compatible with Android devices so that anyone can use it. 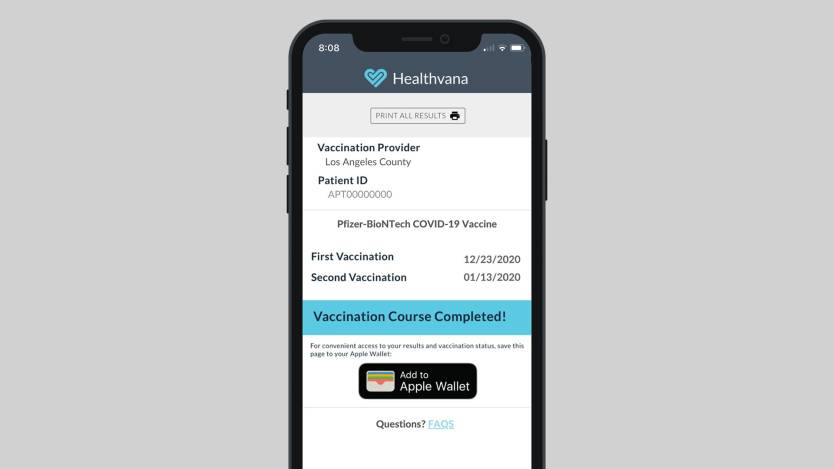 “We’re really concerned. We really want people to come back for that second dose,” Claire Jarashow told Bloomberg. And “we just don’t have the capacity to be doing hundreds of medical record requests to find people’s first doses and when they need to get their second.”

Jarashow is the director of vaccine preventable disease control at the Los Angeles County’s Department of Public Health. The county just broke its record for COVID-19 deaths and hospitalizations, and it’s racing to provide vaccination “as quickly as humanly possible.”

The director also addressed privacy concerns in the interview with Bloomberg, saying that the county worked with Healthvana to protect personal information. The data that Healthvana stores sit on Amazon Web Services’ HIPAA-compliant servers. “It’s as safe as we can make it,” Jarashow said. “Personally, I would feel comfortable using it, so I hope that’s reassuring.”

Healthvana is discussing the app with “anyone who has a large number of people interacting with them,” according to Chief Executive Officer Ramin Bastani. The exec said the app wouldn’t be the only way to show vaccination proof where proof is needed.

Vaccine supply is still low in all markets where vaccine campaigns have started, so governments have established a particular order of vaccination. Health care personnel is the main priority in most countries, US included, followed by other at-risk populations. The general public, consisting of healthy adults who do not qualify as essential workers, will get vaccinated at some point in spring or summer.

Scientists discover how psoriasis and eczema develop in skin cells

Want to stay private on your iPhone and iPad? Here's how you can. 2 min read

Want to stay private on your iPhone and iPad? Here's how you can.